So where am I coming from? What informs me? What excites me? What challenges me?
My background is in sociology and social anthropology, but after a short while teaching I knew I didn’t want to be an academic. The experiences of a friend turned me into a writer. In the mid eighties my friend suffered from what eventually came to be called ‘candida’ or ‘yeast infection’. No doctor was able to diagnose her, or help her, and she had to rely on herself and the limited amount of information available at that time, to figure out what was wrong and who could treat her. Sadly a practitioner’s attempt to help her by putting her on a fruit and vegetable only diet, with no protein, was followed by a rapid deterioration of her health, and she died of leukaemia. My friend was always thorough in everything she did.This time that faith in her practitioner, and her ability to follow instructions to the letter, backfired. Everything we now know about how carbohydrates turn into glucose, and how glucose feeds cancer cells, screams out against such a drastic diet, when her gut was already compromised. 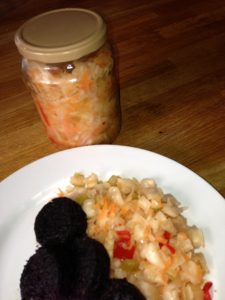 Before this tragedy we decided that instead of writing a book about children’s diet we would advertise for others with yeast overgrowth, interview them, and write about their plight. My friend dropped out as it was too distressing to hear their stories, and I decided to use all the material I had gathered and turn it into a book. This started my long and fascinating journey into health, in the days before websites, emails or blogs! The book was also a polemic against drug based medicine.

From there I next wrote a book about ME or Chronic Fatigue Syndrome. Throughout this journey I was always interested in the role of diet and health, but it was only when I discovered the Weston A Price Foundation that things really clicked into place.

Whilst I had been taking probiotics, why had I not thought to eat fermented foods instead?

Whilst my body had been silently crying out for minerals, why hadn’t I been regularly making and drinking bone broths? As my weightsteadily crept up in my mid forties thank goodness I never bought into calorie counting and low fat diets. See my post about weight gain, carbs and the 5/2 diet. I was too into good food to give up salad dressing, or butter! But the penny really dropped into place when I read about Weston A Price and the role of traditional foods. Yes, I had been an early sceptic about newfangled soya milk.The taste was enough to put off anyone but the most determined ‘out there’ free from person! But I had not twigged, yet, about the benefits of raw milk, over the dangers of pasteurised. Having written a book on candida, I had contributed in a small way to the fear of food, and the demonisation of milk, amongst other things. I knew I had a problem with wheat, but it was not big enough to rigidly abstain in all situations. Or so I thought. 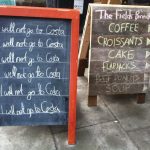 When on a trip to the US in 2007 I bought Sally Fallon Morell’s cookbook, based on the principles of Weston A Price, but it sat on the shelves for a long while, occasionally dipped into, but never really ‘used’. Then a Weston A Price conference in London, with Sally Fallon talking, revved up my enthusiasm, and at last I found a community of people with whom I resonated big time. It felt like coming home. Finally my fascination with anthropology fell into place, because here it was coupled with my other passion; how we nourish ourselves.

The thread running through all this is my political antennae, and my environmental concerns. Who controls what we eat? Why is five fruit and vegetables a day so misleading? When we demonise animals for food, because of the amount of water and grains they consume, is there another way to protect the environment which gets over those objections? Has the green movement always been right? What about palm oil and soya production, eating into our rainforests? Do our cattle need to be fed on soya? In an ideal world, if cows can’t be sustained in areas where there is no grass, why rear them there? Time after time we come back to the local! What grows best in the local, and how can we learn more from our ancestors who passed on that knowledge to succeeding generations, until we came along and tore up the rule book.

So stick with me here, dip in and dip out. Lets take this journey together as we uncover what truly sustains us, despite this toxic and perverted world!

Finally, a word on why I am not linking you in to Amazon to buy books that may be mentioned here, and why I feel so strongly about this I am declining the kickback that Amazon gives to bloggers, to fund us. We have to take a stand against global corporations that avoid taxes and treat their workforce unfairly in the drive to keep prices lower than they should be.  Amazon is not a sustainable business if they were to pay the taxes that are owed in each home country, and the salaries that are justified. To get help about where to buy books, after first trying your local bookshop, go to  The Ethical Consumer 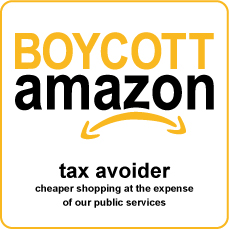