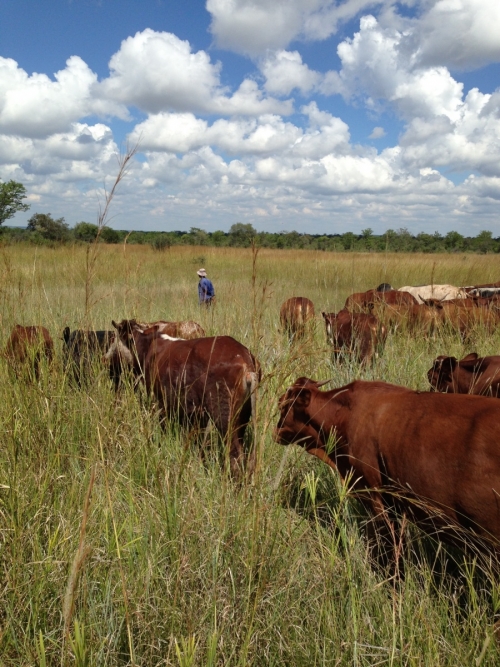 Zimbabwe landscape of well fed cattle on the move: healing the planet one hoof at a time

When I read that whilst staying at Dimba Ngombe Ranch (African Centre for Holistic Management in Zimbabwe) I could experience what it was like to go out herding in the bush I immediately booked. If you are here as an ecotourist with a sketchy understanding of what Allan Savory means when he says livestock properly managed can save the planet, opt for this and you will ‘get it’ whilst on the move. As well as much more.

You will reach the kraal at dusk as the cattle come home for the night, and stand there for many minutes as they patiently enter the kraal one by one. Look at the churned up soil in the kraal and imagine what that will be like over time, as the effect of all that manure and urine kick in, with added hoof deployment. 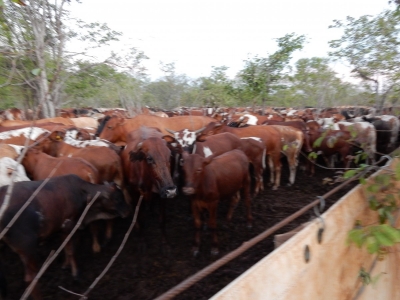 500 cattle protected from lions for the night, whilst regenerating the land in weekly moved kraals

Multiply this many times as the kraal is moved to other areas weekly, add in the ground covered by livestock every day in the bush, and see ex kraals covered in green before and after the rains. OK, you can see the before and after photos, but when opponents accuse Allan Savory of deploying Photoshop isn’t it good to check it out for yourself? 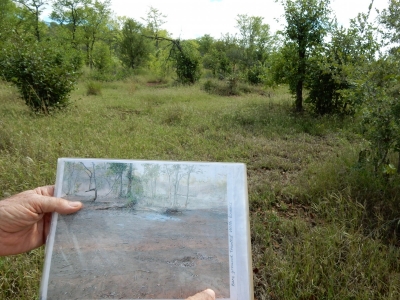 But coming to Zimbabwe you want more than an exercise in climate change. You will share a tent with a herder, and if you are a woman, a female herder will be on duty to look after you. By the fire you will watch as supper is made, and shared. Maize meal for the dogs is first to be cooked, to give it a chance to cool down. 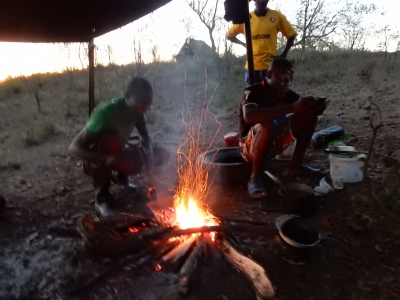 Night time at the kraal

Coming from the developed word where gadgets have become necessities, marvel at the lack of them here. Need to remove a hot saucepan lid? Use your fingers deftly, and over time they get used to it. Need to take up a hot saucepan handle? Put a perfectly shaped stick in the hollow handle, and do it that way. Why bother with cutlery, when making a ball of maize is the perfect way to scoop up the liquid from the stew. Yes, they did find a spoon for me, but that was before I noticed how to eat without it.

From under the canopy over the fire, watch the sun go down and the moon come up, and wonder at the stars so bright in the bush without city lights to tarnish their impact.

As you settle down for the night, on a comfortable mattress, the sounds you hear will vary. If you are lucky, in the middle of the night, you will hear lions roar, knowing that the herders and the dogs are skilled at keeping you safe. I was not lucky. All I heard was the cock crow in the early morning light, and the dogs bark sparingly. I had been told, perhaps teasingly, that I would be awake all night with the cows mooing. Not a bit of it! After a day foraging and chewing on the move, they are pleasantly tired and deeply asleep, or a least happy enough not to make a noise. 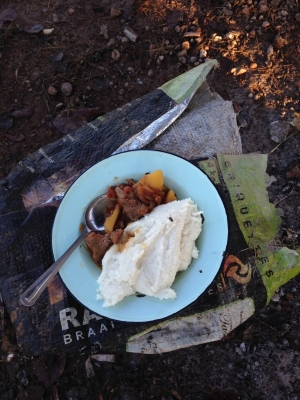 Maize, beef, onion and tomato cooked over the fire after a long day’s herding

Naively I asked what was for breakfast. A look of surprise, before being told, patiently, that it was what we had for supper the day before, maize, beef, and onions. And good it was too, especially thinking of the amount of walking to be done whilst on the move. Walking at a slow pace you quickly get the hang of what needs to be done: just small movements are enough to keep the cows moving in the right direction, though the temptations to dawdle with all that forage must be huge. What you notice most is the sound. Constant munching, heads down! At one point the herders told me that the animals were moving too fast, and needed to slow down to eat enough.

Every now and then you will feel the heat, especially if you are out on a day with few clouds. Taking shelter in the shade of a tree does not mean you are left behind, because there are so many animals, you have time to dawdle, and catch up at the other end of the herd. You quickly learn that walking in the middle is pointless, because there is so much ‘work’ to do at the edges gently moving things along.

At home in the UK calves are weaned very early, forcibly taken from their mothers, to give us their milk. Here in the bush cows patiently wait whilst their calves suck, and only at the very last moment do they kick up their heels and move on, with calves hanging on and dragging themselves along with the udder still in their mouths. 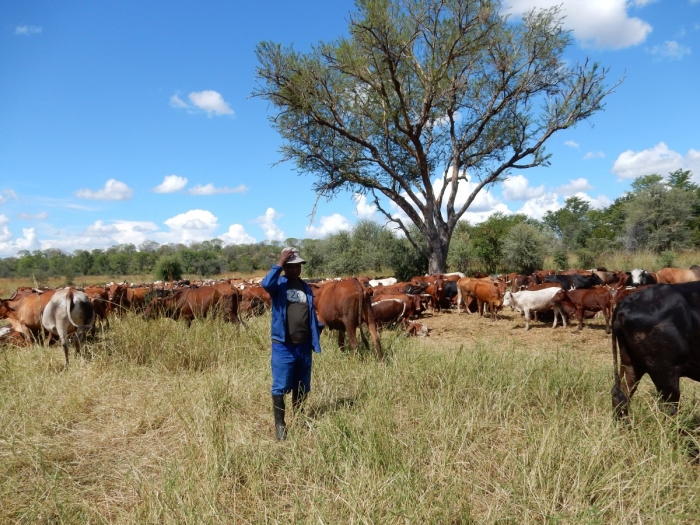 Fed and finally watered: at the river waiting to return to the kraal

Finally, we reached a river at lunch time, and it was a truly wonderful sight to see all the cattle and goats wade in to get water. At this point herder shifts change, and after a rest in the shade for an hour, the homeward journey is started.

When you think of herders on foot, a timeless and deeply resonant ancient ‘memory’ kicks in. Shepherds tending their flocks, isolated from other humans for long periods of time, sitting on a rock, whilst the sheep and goats graze where they please, within sight. Here, this new kind of grazing, which is planned and purposeful, and as far away from overgrazing as is possible, is constantly on the move. It  involves so many cattle it pays to add in your neighbours cows, not as an act of charity, but as a sensible thing if you want to heal the land in a quicker time. ‘The more the merrier’ is the motto here. Which is why the ranch only owns 250 of the cattle, and takes on the other 250 for free, apart from medication costs. Neighbours benefit and then ask the questions afterwards, such as what are you doing to produce such abundant forage and healthy soil, when I cannot look after my own animals in the same way?

Sometimes, we get the chance to step out of our lives, and experience something totally different. Walking with the herd is one such opportunity. It gives you the chance to connect with nature in a whole new way. Walking at their pace means you surrender control, and at the same time you become deeply aware that this is an exercise which is healing the planet, one hoof at a time. Then, out of that process of guardianship and care for animals you suddenly realise our mutual dependence, and gratitude kicks in. 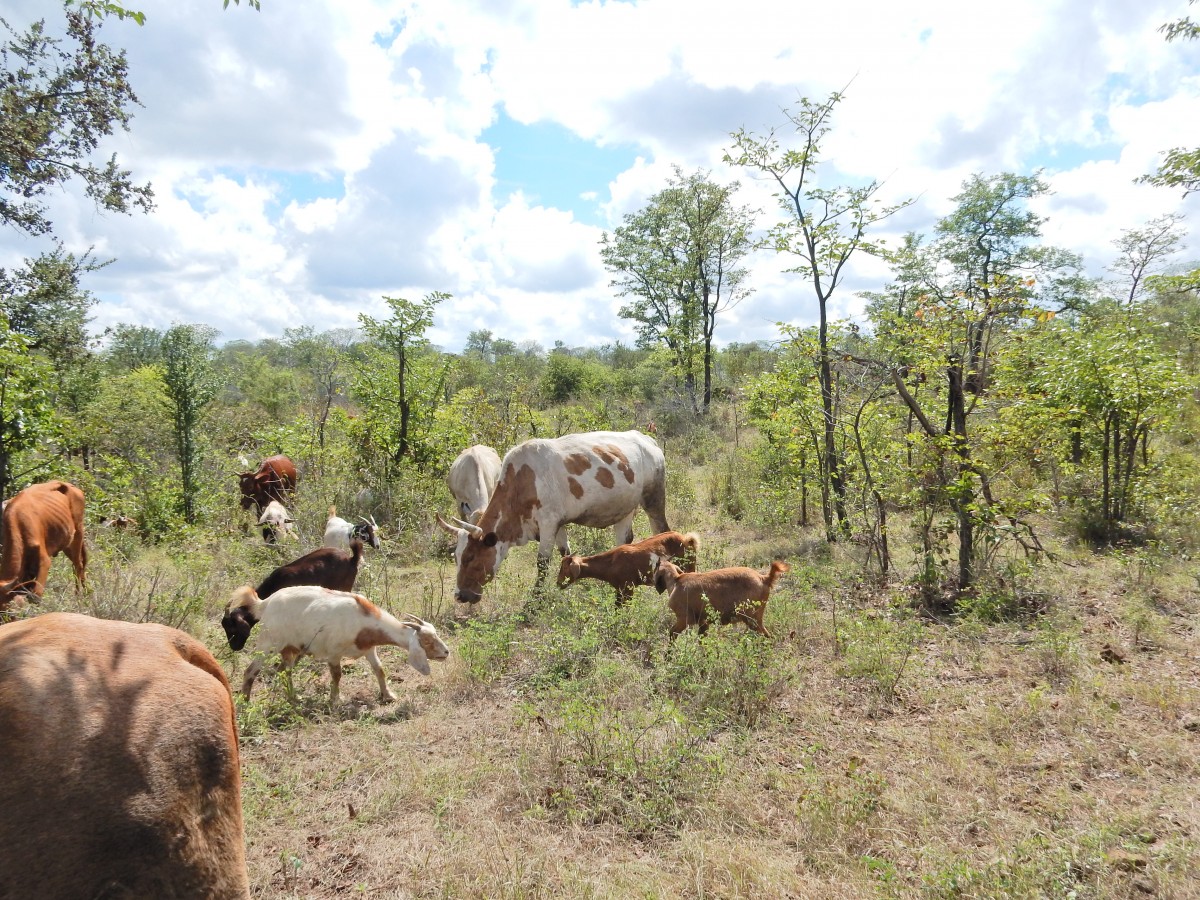 Cows and goats grazing together

If you have had enough of reading about climate change, and want no more facts and figures, put the books down and catch a flight to Zimbabwe. And if the airline suggest you offset the carbon produced by flying by donating to plant more trees, just know that you have helped sequester carbon into the soil instead. Now that is something to talk about around the dinner table, when cows are blamed unfairly, once again. As that starts to happen, you will find yourself taken back to the bush, with the sound of the herd taking food in at one end, and releasing the remains at the other. If ever you start to despair about the world, and what you will be leaving to your children, know that your direct experience, will have made a difference. At the deepest level, of feeling and connection, you have walked on the land, and seen it transform. Spread the word, and be part of the change. The cows deserve it. We deserve it. And so does our planet.