PUTTING THE FEAR OF GOD INTO MILK

Home/Uncategorized/PUTTING THE FEAR OF GOD INTO MILK

PUTTING THE FEAR OF GOD INTO MILK 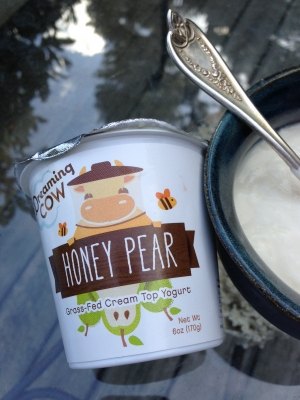 Grass-fed milk full fat yogurt from a US store 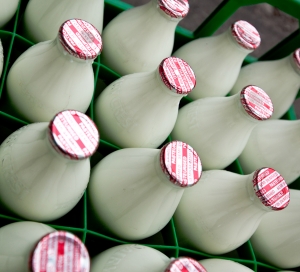 Habits for health as we grow older and raw milk?! Isn’t raw milk dangerous for health?

Not according to the latest report.

Anyway, isn’t milk only supposed to be for calves?
Not if you look around the world to see how milk is used raw or fermented to form a significant part of many cultures’ diets.

Doesn’t milk cause mucous build up, and allergies?

Yes, if its heat-treated. A small number of people cannot tolerate raw or pasteurized milk, but many who assume they are allergic to milk can actually tolerate raw milk. In one study, compared with children who only drank store-bought milk, those who drank raw milk had a 41-percent reduction in their odds of developing asthma. They were also only about half as likely to develop hay fever — even after accounting for other factors that might be relevant.

Isn’t this what you give up if you want to fight cancer?

Yes, if its pasteurised. 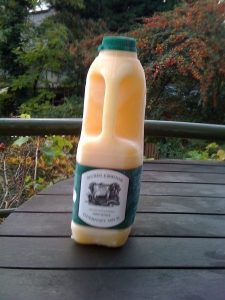 Low fat milk only benefits the milk ‘manufacturers’ who use the cream for cheese and butter. We need the fat in milk to adsorb fat soluble minerals and vitamins. Without it we are nutritionally deficient. Low fat diets are now shown to be harmful.

What has milk got to do with health when most ‘health conscious’ people in the UK (no longer in the US where they know better) drink soya milk instead?

And to top it all doesn’t milk contribute to global warming because of the cows’ excessive farting?

It’s the other way round when it comes to global warming! Only cows fed an artificial diet of grain fart a lot. The others, getting to be in the minority now, sequester carbon into the ground when they eat grass, and actually help overcome the nasty effects of carbon emissions.

So lets move on and get our terminology right. When talking about raw milk we should be able to just say milk (real milk)! But buyer beware.

Are we talking here about real milk straight from a grass fed cow? Or milk from grain fed cows? 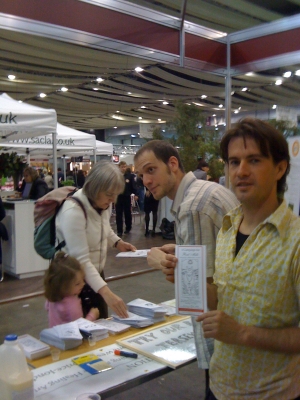 Handing out samples of (raw) milk at a Health Fair, with the farmer and his Jersey cow beside me I hasten to add, I was amazed at how many people came up and said it took them back to childhood. They drooled over the taste, entering some long lost reverie: only a few turned away in fear, neglecting to hear my spiel about how legal raw milk is uber-hygienic these days, and super regulated.

There are more health scares from eggs, chicken and water than from raw milk.

Its not that long ago that you could get raw milk easily in the UK, at least away from the big conurbations, until a law came in banning its sale, unless direct from the farmer. Now a growing body of health conscious ‘in the know’ foodies in the UK source their raw milk legally direct from the farmer at farmers’ markets, or the farm gate.

The situation in the US is complex, depending on individual state laws, and necessitating some people to set up cow shares, or do raw milk pick ups across state lines. In the US today there are more health scares from green leafy vegetables than raw milk.

People go to such trouble sourcing raw milk because when their children drink raw milk as opposed to pasteurised milk, the incidence of allergy to milk goes down. As the dead bacteria decompose and breakdown in pasteurized milk they release histamine that may be a contributing factor in eczema. Raw milk farmers report that they have many customers who within three weeks of drinking raw milk, see their eczema disappear. 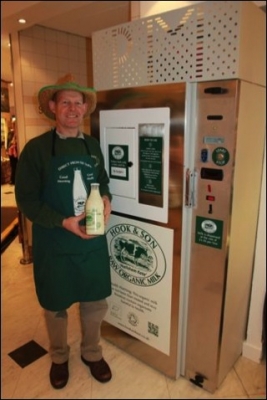 In Europe since 2005 some countries have raw milk vending machines, with fail safe mechanisms that alert the farmer by mobile phone if the refrigeration mechanism breaks down. Italy has 14,000 raw milk vending machines. In England the large department store Selfridges, in central London, experimented with a raw milk vending machine, owned by the farmer, Hook and Sons, until the Food Standards Agency tried to prosecute them and the store. The FSA withdrew their legal action coincidentally just as a film about Steve Hook and his cows was showing at the Sundance Film Festival in the US, in May 2013.

Critics of pasteurisation when the debate was raging in the 1930s and onwards, claimed that it covered up dirty farming, treating the symptoms and not the cause, and allowing dairies to distribute old milk when it is not as fresh as it should be.

In fact if you let raw milk go too long, it does not go ‘bad’ like heat treated milk. If kept cold, you should not notice any change in taste. After five to seven days, the bacteria in the milk start to produce lactic acid, which gives the milk its sour taste. However, this same acidity effectively ‘pickles’ the milk. Many bacteria cannot survive this acidic environment and the bacteria population decreases. Raw milk goes from being a nutritional fresh milk, to a nutritional stable sour milk that can be used in many ways. On the other hand, once pasteurised milk turns, it can only go bad. When raw milk starts to turn, it will have a slightly, cheesy, and/or sour taste. This is a change in taste. The milk is still fine, and can be used in cooking, or for separating the whey from the curds.

WHAT TO DO WITH SOURING MILK? 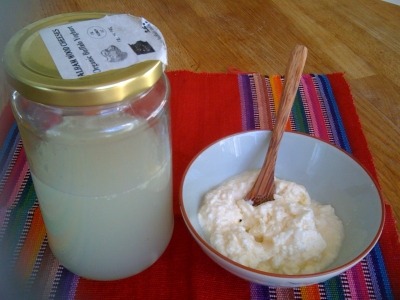 The whey can then be used to ferment sauerkraut, to make health giving smoothies, or add to healthy fermented drinks, such as beet kvass. Add whey to homemade mayonnaise and it will last for up to six months in the refrigerator because of the fermentation introduced from the ‘live’ whey. The point to be emphasized here is that as long as the farmer is scrupulous in how the cows are milked, and in keeping the milk cold afterwards, there is usually no problem to human health from drinking raw milk.

As a UK schoolchild from 1953 onwards, its fascinating to me to find out that most of the school milk supplied free to schoolchildren was not pasteurized. Pasteurisation was made compulsory in Scotland in 1983, and moves to extend this to England and Wales were thwarted by two pressure groups, the Campaign for Real Milk and the Association of Unpateurised Real Milk Producers and Consumers. They argued that pasteurisation increased atopic allergic reactions, and the destruction of antimicrobial proteins and other anti-infective agents. 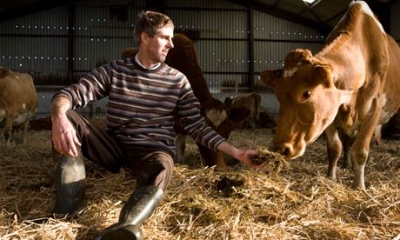 WHAT DOES PASTEURISATION DESTROY?

Raw cow’s milk has all 8 essential amino acids in varying amounts, depending on the stage of lactation.

1. Before heating, and straight from the cow, milk is rich in colloidal minerals and enzymes necessary for the absorption and utilization of the sugars, fats and minerals in the milk. If minerals can’t be absorbed we can get osteoporosis.

2. The enzyme phosphatase allows the body to absorb the calcium from the milk – and is destroyed by heat.

3. Lactase is an enzyme that allows for the digestion of lactose, or milk sugar – and is destroyed by heat. It is changed to beta-lactose by pasteurization, causing faster absorption of sugar into the bloodstream. If these sugars are not digested we are more prone to allergies.

4. Research findings suggest that the protective effect of raw milk consumption on asthma might be associated with the whey protein fraction of milk, such as BSA and alpha-lactalbumin, which is destroyed by heat processing.

5. Butterfat has heat sensitive cortisone-like properties that help to prevent stiffness in the joints. Not such a great idea to heat it then. Fats once heated are more toxic.

Rarely is anyone truly allergic to grass-fed cow’s milk. Yet we still see research which in trying to establish the harmful effects of milk on some people, such as constipation in children, fail to distinguish between pasteurised milk and raw milk. 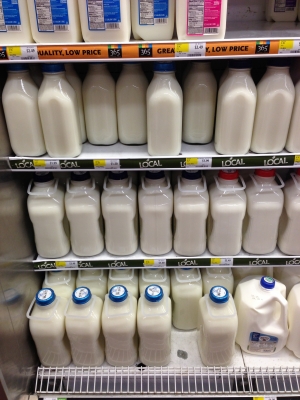 So milk from grass-fed cows has amazing properties, one of which is the presence of naturally produced antimicrobials in solution. Another is the production of a beneficial fatty acid known as CLA, short for Conjugated Linoleic Acid.

Grain-fed cows have as little as one fifth the CLA in their milk as grass-fed cows.

If this is not enough, what about the research?

Three quantitative microbial risk assessments (QMRAs) recently published in the Journal of Food Protection have demonstrated that unpasteurized milk is a low-risk food, contrary to previous, inappropriately-evidenced claims suggesting a high-risk profile. These scholarly papers, along with dozens of others, were reviewed on May 16, 2013 at the Centre for Disease Control in Vancouver, BC (Canada), during a special scientific Grand Rounds presentation entitled “Unpasteurized milk: myths and evidence.”

The reviewer, Nadine Ijaz, MSc, demonstrated how inappropriate evidence has long been mistakenly used to affirm the ‘myth’ that raw milk is a high-risk food, as it was in the 1930s.

The scientific papers cited at the BC Centre for Disease Control presentation demonstrated a low risk of illness from unpasteurized milk consumption for each of the pathogens Campylobacter, Shiga-toxin inducing E. coli, Listeria monocytogenes and Staphylococcus aureus. This low risk profile applied to healthy adults as well as members of immunologically-susceptible groups: pregnant women, children and the elderly.