What to drink first thing?

What to drink first thing? 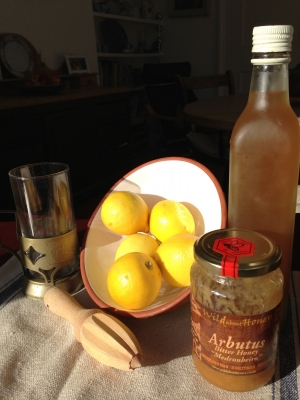 I make time for my morning ‘habits’ because that’s my priority, and I don’t have young children to be responsible for. But ultimately, even with the busy rush of family life, which I get a glimpse of when my granddaughter comes to stay, there is still the need to squeeze in some things to do first thing in the morning. And this is one of them.

But I have elaborated on it to include two other ingredients! So the basic drink is warm water and the juice of half a lemon. To which I add one teaspoon of raw Arbutus honey, and a dash of organic non pasteurised  apple cider vinegar.

I include the honey after a friend from India was staying and he stressed that honey fits in with Ayurvedic principles. The raw honey I use is quite special because it is Bitter Honey from Portugal. I would not have known about it but I was in my local Lebanese supermarket (sells everything) and a Portuguese friend pointed it out with exclamations of delight.

Arbutus “bitter honey”, also known as Strawberry Tree honey, comes from southern Portugal, Sardinia and Greece, with some Strawberry Trees in Ireland. The Arbutus Bush is an evergreen that has many medicinal properties and flowers in winter. This is what the bees use to feed their colonies. The honey has an unusual bitter/sweet complex taste and is raw to boot. You can read all about it here. When honey is raw it contains  natural antioxidants, enzymes, pollen, propolis, amino-acids, trace minerals, vitamins and antibacterial properties not necessarily still there when honey is processed. I like the fact that raw honey has a probiotic effect and is easy to digest. Its low glycemic index is a plus, and together with apple cider vinegar it can aid with weight loss.

Arbutus honey is one of the most antibacterial honeys in the world. Studies  suggest that this is possibly the most antioxidant rich honey available, apart from Raw Carob Honey. It is also known to be beneficial for lung health, which is no bad thing as you age.

Lemon, contrary to what you may think, is alkaline in the body, and not acidic. Add in the honey and it helps digestion and elimination. I have just started adding a dash of apple cider vinegar to the mix. Remember: to avoid problems for the enamel on your teeth, its best to use a straw to drink with. 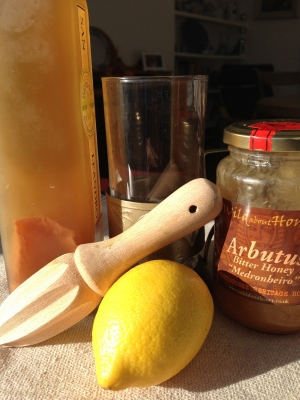 I first used Apple Cider Vinegar (ACV) when I was pregnant with my second child. Towards the end of my first pregnancy I developed high blood pressure, and was advised for the second pregnancy to take 2x daily drink of warm water with a tablespoon of ACV and a tablespoon of honey. It seemed to help. It is suggested that part of the benefit comes from the fact that ACV is double fermented to make vinegar.

The cider vinegar I use now is one I made by accident. I had  28lbs of apples two years ago from one tree in the garden, so I attempted to make cider by borrowing an apple press. Fortunately for me it went straight to vinegar, over three or four months. At the end I added in a mother culture from a bought bottle of unpasteurised apple cider vinegar, just to ensure that it stayed alive. It is extremely good!

Check out the benefits of ACV here. To select a few benefits, the citric acid stimulates stomach juices. The increased acidity of the digestive system leads to better calcium and magnesium absorption. This can lead to less leg cramps, which stem from a calcium and magnesium imbalance. Other minerals present are manganese, phosphorus,  and silicon.

If you are taking it as a tonic on its own 2-3 teaspoons in 8oz of warm water is the amount you will need, along with 1 teaspoon of honey. As a first thing in the morning drink try to drink it as soon as possible, about one hour before breakfast, to allow it to do its work. Its just a  matter of ditching  your old habits, in order to fit in this new one. Give yourself a week or two and you’ll be feeling as though you did it

Tom helping me juice at home 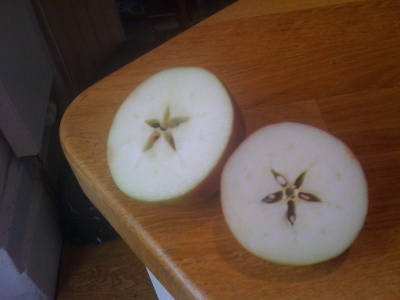